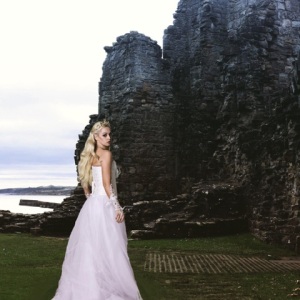 The fae are as beautiful as they are dangerous. These wingless fairies are a magical and youthful species. They reach adolescence in their teens, later than humans by several years, but typically starting around age thirteen. Once they reach full maturity around the age of twenty-five they cease to physically age. With a life span of about five hundred years, they have centuries to roam the earth beneath their feet in Ilysia and perfect the craft of their magic. The one thing they never lose is their beauty, as they are also naturally seductive. Fae naturally produce and emit seductive pheromones that will entice any Ilysian species with Humans being the most susceptible and their fellow fae being the least affected by it. They are exotic in their beauty with their slightly olive toned skin, almond shaped eyes, and high cheekbones. They commonly have dark eyes in shades of blue, green, or brown accompanied with either blonde or black hair. Fae stand at a medium height and have slight points to the tips of their ears that is less defined than the points of Elven ears.

However, their history is the most marred of any species in Ilysia. Three thousand years before the first Empress rose to power, the fae found themselves caught in a fifty year long civil war that would seem to forever divide their society. This conflict over ethics and boundaries of magic, also left a divide in the society of witches and saw the creation of vampires and werewolves using magic that is considered unnatural by the White Fae and White Witches. From then on the fae remained split into the Kingdom of the White Fae and the Kingdom of the Dark Fae, with the Queen of the Dark Fae also ruling over the Dark Witches. The Dark Fae focus on power without moral reservation, throwing out the moral codes the White Fae continue to live by and living their lives with little to no rules. Anciently, the fae have a deep respect for nature and the natural order of life, feeling themselves bound to protect it from destruction. The White Fae continue to live by this and are nurturers of the world while the Dark Fae have become the opposite.

Fae society is matriarchal with their ruler being a Queen and her heir always being her eldest daughter or the oldest of her closest female relatives, usually a sister or niece. When it comes to love and sexuality, the fae believe in freedom. They do not require marriage as human society does and only marry if they choose to be with a partner for the remainder of their lives. They do not require love for sex and are known for being sexual, seductively beautiful beings. Fae tend to have at least one paramour before they ever choose to settle down and marry. The current Queen of the White Fae’s heir came from a relationship she had with a witch named John Daesyn before she ever married, making Princess Kélinae a hybrid of fae and witch. Queen Résalyn did later marry a fae and have two full blooded fae children: a daughter named Janélyn and a son named Ivyn.

The Fae are known for more than their seductive beauty as they are tricksters, witty, extremely intelligent, full of powerfully potent magic, and fiercely loyal. The loyalty of the fae is not easily given and it must be earned, much like their respect. The fae are also known specialist of potions from medicinal to poisons, being more gifted than Elves with many different herbs and plants. Fae are also strong and agile, making good warriors and even better spies. Many fae train with various weaponry as well as magic, making fae warriors a force to be reckoned with.

Fae do have weaknesses. Their blood is a vampire’s biggest weakness as their blood tastes as sweet as fruit nectar to one. Werewolf bites make them extremely vulnerable as the toxins emitted in the bite are almost instantly fatal to them. All fae and hybrids with even a drop of fae blood are highly allergic to gold, known for burning them or becoming toxic in large amounts. Gold can be used to weaken and even bind a fae. Weapons, potions, and magic will also take the life of a fae.

Fae are beautiful, powerful, and dangerous but not without weakness. It is said that no other species in Ilysia can compete with the fae in terms of beauty. Their divided society has left a lasting mark on Ilysia but it has not stopped either group from continuing on. The White Fae quickly took sides with the Humans when the first Empress first rose to power, showing just how protective and loyal they can be. They are a species that has stayed at the center of all Ilysian history and will remain there for the rest of time.

Bottom photo: Legendary Queens concept art (White Fae Queen Maelyn is on the left and Queen Anna from the monarchy that rules the Humans and White Witches on the right) by Le Fey Designs