The Story of Vlad the Impaler and the Women He Loved

The Passion of the Dragon Saga: Volume One

Please do not copy or reproduce without the express permission of the authors. 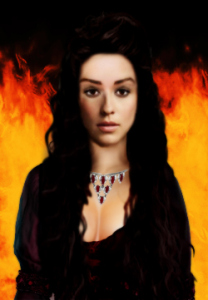 It was a warm summer night in 1449 as I prepared for the dance.  I took one last glance in the mirror and was satisfied with what reflected back to me. Father had allowed us to commission a seamstress for our dresses. It was the deepest of reds. The shade of red that makes you think of a drop of blood drying on your finger. And I loved it! I was excited and eager to get in the carriage and be on our way.  As usual, my twin sister Erzsébet was moving along slower than I liked.  “Hurry, Lizzie! I am ready to go to the dance!” I exclaimed.

“I am hurrying, Deenie. I am! I cannot get my hair the way I want.” Erzsébet replied.

I took the brush and comb from her hands, “Let me help you.”

I always seemed to be doing things like that.  Helping Erzsébet had become second nature to me.  Our mother died when we were very young and in a way, I took over as her mother.  It took a matter of seconds for me to have Erzsébet’s hair perfect and we were ready to go.  We both took one last glance in the mirror before heading out to the carriage.

When we arrived at the hall, the dance was in full swing.  As I stepped from the carriage I could hear the music and laughter coming from inside. I was giddy with excitement. After checking our cloaks, Erzsébet and I went in search of the party.  We walked into the great hall to see it was brimming with people dancing and laughing.  I wanted to dance but had to wait for a young man to ask me.  This was the part I had the least amount of patience with, the waiting.  My eyes scanned the room just to take in who all was there.  My breath caught in my throat as my eyes stopped at a pair of piercing green eyes looking back at me.  Looking at those eyes, it felt like he was looking deep into my soul.  I looked at the face that went with the eyes.  The man had long, curly brown hair.  He had a slight moustache and beard.  His lips were full and made me think things a young girl should not think.  He was leaning against a column with his arms folded.  I wanted to dance with that man.  I wanted to marry that man.  He was absolutely beautiful.

His eyes turned from me and I saw he was looking at my father.  How did Father know him? Would he introduce us to this young man? They spoke very briefly. I then watched as the man’s gaze turned back to me. For a brief moment, I wondered if he was going to come and speak to me.  Seconds later, he turned on his heal and left the hall.

I turned to my sister, “Lizzie, did you see that man over there?”

She looked at me “No, I was looking at a man myself.”

We had no idea we were looking at the same man.

Several dances later, I excused myself to walk out onto the balcony for some air. It was hot in the crowed ballroom from all the dancing.  I stood at the balustrade, looking out over the beautiful grounds.

I felt a presence behind me and I turned as he spoke, “Hello. You’re Erdenia. Correct?”

He smiled a slight smile, “I am Vlad Drakul, Prince of Wallachia. Would you care to dance?”

He offered me his arm and we walked into the ballroom just as a slow waltz began playing. He took me in his arms and we began to dance. We did not speak for the duration of the song. Staring into each other’s eyes, I felt myself falling in love with him. We never broke eye contact until the song was over.

He took my hand to kiss it, “It has been a pleasure, Miss Erdenia.”

Then he was gone. The rest of the night, I looked for him in the crowd. As I stepped into the carriage for the ride home, I began to wonder if I would ever see that man again. If I only knew just how soon it would be. 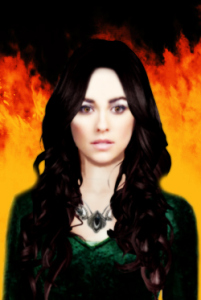 I loved a dance; the spirit, the dancing, and the laughter. I almost lived to go to dances now that I was old enough. Father had even let my sister and I get new dresses this time. It was a beautiful dark green dress that my twin sister, Erdenia, was having to keep me from wearing around until tonight. She always said that dances made me annoyingly giddy. I could hear her already telling me to hurry.

“I am hurrying, Deenie. I am! I cannot get my hair the way I want,” I replied.

She took the comb from my hands and said, “Let me help you.”

I do not know what I would do without my sister. We lost our mother when we were very young and she has always taken care of me. We were only minutes apart in age but she seemed to be the one growing up faster and mothering me. I knew one day she would be a great mother to her own child.

She seemingly had my hair fixed in seconds. I had been struggling for what seemed like an eternity on something that was so simple for her. I glanced in the mirror one last time before I followed my sister to the carriage. I only wished I could be like her. She was so strong, beautiful, and confident. I felt so dependent on having her around. I only longed to be more like her, to be stronger.

It seemed like no time had passed before we arrived at the dance. I followed my sister from the carriage hearing the music already playing. We checked our cloaks and I continued to follow her in search of the ongoing dance. As we entered the great hall, there were people everywhere already having a grand time. I could only hope to get the chance to dance tonight. I loved a dance, especially when I was feeling well. My sister and I were both taking a moment to look around the dance at everyone. I could not help but find my eyes stopping on a young man across the room. He had stormy eyes that seemed to just draw me in as he leaned casually against a column. He had long dark hair that seemed to settle in curls upon his shoulders with a small moustache and beard on his face. He kept his arms folded as he seemed to be looking across the room and then right at me. I could not seem to make myself take my eyes from his gaze. I could see him seemingly speaking to another man nearby only to realize that it was my father. My father knew this man? I had never seen him before because I know that I could never forget those eyes that shared the same grey color of storm clouds. I seemed to be lost in my thoughts as I found him looking at me once more.

I was only taken from my thoughts by my sister’s voice after I had watched him leave the Great Hall, “Lizzie, did you see that man over there?”

I turned to look at her and answered, “No, I was looking at a man myself.”

Though, at that time, neither of us knew that we had been looking at the same man.

I quickly parted ways with my sister so that I could dance. It was not often that I felt well enough to do so and I was going to dance as much as possible. I was quickly asked, and I did so as if it were my last night on this earth. I am sure that my sister would also be dancing as much as I was. The night seemed to pass by so fast as the first near dozen partners and I had swayed to the music. I felt so happy to just be there with all of the others that night it was as if I were never the usually sick young lady that I always had been. I excused myself from the my current dance partner to try and find my sister. I walked out of the ballroom to a foyer to see if she was there but instead of finding her I found him. He smiled at me as he stepped closer to where I stood. I could not help but find myself looking right into those stormy grey eyes that had mesmerized me when I had first arrived.

“Hello,” he said to me as I found there was hardly any more distance between us. “Your name is Erzsébet, am I right?”

“Yes,” I answered with a smile. “My name is Erzsébet, and what is yours, my lord?”

“I am Vlad Drakul, Prince of Wallachia.” He replied as he offered his hand. “May I have the next dance?”

“Yes, my lord, you may,” I responded with a smile as I took his hand.

He led me back into the ballroom as another waltz started to play. I turned to face him, as he slowly pulled me into his arms. We began to dance as my eyes met his and it was as if we were the only two people in the room. As we danced, I felt like I was floating on air. I could not tear my gaze away from his beautiful grey eyes. I was lost in that storm and the more lost I became, the more I began to fall in love. I could have spent the rest of my life in those moments. As the song finished, he took my hand gently and placed a soft kiss on it.

“Thank you for the wonderful dance, Miss Erzsébet,” he said as he turned and seemingly disappeared into the crowd.

I knew that there was still a smile painted across my face that I did not know how to contain. I continued to dance the rest of the night, but I could not stop myself from continuing to look for him. I never saw him again before my sister and I left in our carriage to return home. I only thought of him and those mesmerizing stormy eyes the entire way home. I longed to see him again and wondered if I ever would. I had fallen in love with this mysterious Prince who had made me feel like I walked on air. I knew then that my thoughts of him would never leave my mind.